??Keith D. Bechtel, born in Oil City, PA on August 25, 1937 (age 79), passed away on July 30, 2017 at his home in Guys Mills, PA after a long battle with cancer. With great courage and dignity, he devoted the last year of his life as a volunteer in three clinical trials at the National Institutes of Health where his sacrifice will one-day provide a cure for others. Keith was a son of Kenneth D. and Francis I. Bechtel (both deceased); and was the eldest of three children: Robert W. Bechtel (deceased) and Kay Eastman. Keith was married 53 years to Audrey Smith Bechtel (deceased). Survivors include his two children, Laura and Darrel Bechtel; a grand-daughter, Melanie Backhaus; and his beloved dog, Abby. 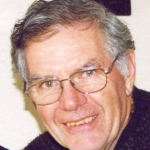 ??????Much of Keith’s successful career was founded upon his strong leadership and managerial abilities which served him well during his years of service at his family’s Spring Run Maple Syrup business, Ohio Paper Co., Abex, General Electric, Franklin Bronze, WheelTek, Fort Wayne Foundries, Frontier Foundries, and Hedegus Aluminum. His entrepreneurial spirit led him to form and run his own aluminum casting business, Allegheny Cast Metals.

In life, Keith had a profound respect and love for the outdoors. His passion for hunting and fishing was only exceeded by his love of boating. His contributions to society also include designing and patenting a specialized foot-pedal for steering watercraft, thereby freeing both hands for casting. Some of his nautical endeavors included navigating the Erie Canal and sailing waterways in Canada, especially the North Channel. His adventurous nature (and his persistent grand-daughter) lead him on several overseas adventures to Australia, New Zealand and Italy. Keith was equally happy spending relaxing evenings near the campfire, telling hunting stories with his friends and family in the backyard.

The Bechtel family wants to thank the many friends and neighbors for their kindness, especially Daryl and Beverly Lake & family, Ray and Ann Gannon, Red and Vicky Bond, Ed Titus & family, Chuck and Audrey Thompson and Aurora Wilson.

For friends to pay their last respects, the Bechtel family invites you to celebrate Keith’s well- lived life during services at the Van Matre Family Funeral Home on Wednesday, August 2nd from 2-4 and 6-8 and on Thursday from 10:00 a.m. until the funeral time beginning at 11:00 a.m. Interment will follow at Kingsley Cemetery, Townville, PA.