Janet Louise King, age 73, formerly of Waterford, passed away unexpectedly at UPMC Hamot on Sunday morning, August 13, 2017. She was born in Girard on November 5, 1943, daughter of the late Theodore and Thelma Kerr Fries. 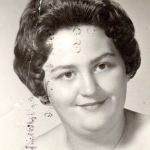 Janet was the devoted wife of the late Robert J. King Sr., who died February 19, 1997, and she was a loving mother and grandmother who will be missed by her family. For over thirty years, Janet was a dedicated employee of MFG in Union City. She formed many friendships from her time there, many of which have continued since her retirement. Janet enjoyed working crossword puzzles, visiting her son regularly at Luther Square in Erie, and eating out and shopping every other Saturday with her close friend Mary.

In addition to her parents and husband, Janet is preceded in death by a son, Michael King, a grandson, Robert James King III, and her sister, Marion Fries Galbraith.

Friends may call at Van Matre Funeral Home in Waterford on Wednesday from 1:00 until time of the funeral service at 3:00 p.m. Burial will be in Mill Village Cemetery.