Clyde H. “Red” Peters, age 84, of Mill Village, died Sunday morning, October 15, 2017 after accidentally falling at his home. Born on November 13, 1932 in Mill Village, he was a son of the late John C. and Miriam Comstock Peters. 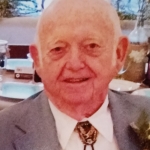 Red grew up in the Mill Village area and after graduating from school in 1950, enlisted in the U.S. Marines and served from 1952-56. He married Rae Marie Dorman on September 17, 1955, and after he returned home in 1956, together they established their homestead by purchasing a farm in Mill Village. Red farmed the remainder of his life, partnering with his son Ron in 1984.

In addition to farming, Red enjoyed woodworking, and was proud to make many pieces of furniture that his family uses to this day, including a handcrafted cradle for each firstborn grandchild. Red and Rae Marie camped and traveled in their motorhome for years, and he liked to hunt and attend local auctions.

He was preceded in death by his wife, Rae Marie Dorman Peters on April 30, 2009; an infant son; his granddaughter Leah; his brother Gordon Peters and wife Martha; brother-in-law Joe Fehr; and sister-in-law Joyce Peters.

Survivors include four children– Laura L. Gallant and husband James of Cambridge Springs, and Rustin A. Peters and wife Merita, Ronald B. Peters and wife Marilyn, and Kevin M. Peters and wife Sandra, all of Waterford; seven grandchildren– Rose Marie Gallant, Matthew (Kelly) and Steven Peters, Brian (Alicia) and Brandon Peters, and Kourtney and Tyler Peters; a great-granddaughter, Brynley; two step-great-grandchildren, J.R. and Ashlee. He is further survived by a sister, Barbara Fehr of Erie; his brothers, George Peters and wife Nancy, and David Peters and wife Judy, all of Edinboro; and his good friend, Peggy Timko of Pleasantville.

Friends may call at Van Matre Funeral Home in Waterford on Tuesday from 2-4 and 6-8 p.m. and may attend the funeral service there on Wednesday at 11:00 a.m. Pastor Bryon Switala will officiate. Interment will be in Waterford Cemetery.