Shirley Mae (Miles) Johnson, age 73, died peacefully at her home in Waterford on October 3, 2017. Born May 28, 1944 to Lewis Edgar Miles and Ruth Helen Fuller, she grew up and went to school in the McKean area. She married Dennis Johnson on September 25, 1970 and recently celebrated 47 years of marriage. 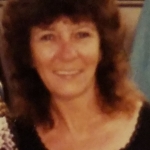 Family was the most important thing to Shirley. She loved the role of wife, mother and grandmother, and especially loved holiday gatherings to bring all family and friends close. She never turned anyone away at holiday time either, so there were often strangers around the table who did not have a place to go during the holiday. Her love of cooking, baking and canning were well known by everyone, and at summer picnics and gatherings, she was in her glory preparing food for everyone.

Shirley was the life of the party, and everyone loved her quick smile, her sense of humor and her kindness. She always had a shoulder or an ear for anyone who needed it, and will be greatly missed by everyone who knew her. She was a loyal friend to anyone she met.

Besides her parents and in-laws, she was preceded in death by brothers Richard, Alfred, and Robert Miles, her sister Karen Mahoney, and dear friends Connie and Judy.

There will be no public services, only a private service for the family.