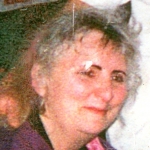 Having lived at her current home since the mid 1970’s, Geraldine made great friendships in her neighborhood, especially with her close friends Carol and Val. She was a selfless person, putting the needs of others before her own. She will be missed by her family who loved her very much.

In addition to her husband, Richard, she was preceded in death by her oldest daughter, Vicky, and her brother, John Wurst.

There will be no funeral services.