Frieda Beaman Janosik passed away January 31, 2018 at the Misericordia Rehab-Nursing Home in York, PA. She was born in Mill Village and was a lifelong resident of Waterford, PA. She moved to the York area three years ago to be nearer to their niece and nephew, Bob and Carol Karotko. 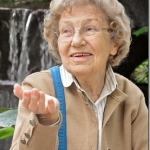 Frieda was predeceased in 2012 by Joseph Janosik, her spouse of 63 years. Also preceding her in death were her parents, Ernest and Waive Beaman and two brothers. She is survived by her nieces and nephews Bob and Carol Karotko, David Karotko, Rose Clement, and Victor Janosik. Madelyn Janosik Chapman of Waterford, a dear sister-in-law, also survives her along with her very dear lifelong Waterford friends and neighbors, Jerry and Pat Fellows and Rosemary Lugaila.

Frieda belonged to Draketown Christian Church where she taught Sunday School and endeared herself to many church members. She also had a full work life, employed at both GE and Edinboro State University.

Post retirement, she and Joe traveled, spent winters in Florida, and always enjoyed a good game of cards or dominoes. They had no children but always took great pride in their nieces and nephews. Over the years, they were loving caregivers to their dogs and their precious hummingbirds. Frieda loved to do jigsaw puzzles, crochet, and knit in her leisure time. She will always be remembered as a kind and gentle woman who was loved by many, and made friends wherever she went.

A graveside service will be held at a time to be announced at Draketown Cemetery where she will be buried next to Joe.