Joyce M. Nye, age 86, of Union City, passed through death to life eternal on Thursday, January 4, 2018, at Golden Living Center-Western Reserve. Born August 12, 1931 in Erie, PA, she was the daughter of the late Harold and Jean (Robinson) Neth. 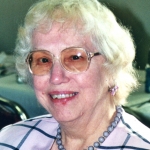 Joyce was a 1949 graduate of East High School and a 1955 graduate of the Hamot School of Nursing. She began her nursing career at Hamot Hospital, taking a hiatus to raise her children. Joyce returned to full-time nursing at the VA Medical Center before accepting a position at the Edinboro University Health Center, from which she retired in 1988.

She was a member of Dorchester Drive Baptist Church, the Waterford Grange, and the Red Hatters Society. She enjoyed traveling with her husband to visit his fellow Ex-Prisoners of War (WWII), keeping in touch with friends both near and far, and spending time with her family. She loved to capture the many “Kodak” moments of her life on her “trusty” 35mm camera.

In addition to her parents she was preceded in death by sisters Jean (Charles) Roberts and Marjorie (Arthur) Nelson, and brother Richard Neth.

She is survived by her husband of 56 years Harry E. Nye, whom she married on February 11, 1961; sons Harold (Susan) Nye, Robert Nye, and Gerald Nye all of Union City; granddaughters Shannon Nye, Andrea (John) Wolf, and Rachel Nye; great-grandson Kasen Jacobs; sister-in-law Rita Neth; and many nieces, nephews, and cousins.

According to her wishes, there will be no calling hours. A memorial service will be held at a later date.