Home/Waterford/Armagost, Marvin A.
­
Previous Next

Marvin A. Armagost, age 73, of Cambridge Springs, passed away after a long illness on Tuesday, March 6, 2018 at UPMC Hamot surrounded by his loving family and friends. 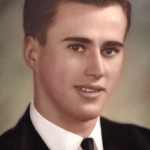 Born in Waterford on November 29, 1944, Marvin was a son of the late James Armagost and Laura Wolfe Armagost. He attended Fort LeBoeuf Schools in Waterford and served in the United States Army. Over the years, he worked at Penn Union, Corry Jamestown, and Lord Corporation in Cambridge Springs.

Marvin was a simple man. He built his own home in a peaceful country setting surrounded by fruit trees, gardens, Amish friends and their way of life, his family, and his three dogs, Ginger, Cocoa, and Maggie. He also loved flea marketing. Marvin loved the Lord and feared no evil nor death, for he had faith and longed to dwell in the house of the Lord forever. He attended Triumphant Life Church in Millcreek, PA.

He was preceded in death by three sisters and two brothers. Survivors include his wife of 32 years, Kathleen M. Kearney Armagost; his daughters, Jenifer Armagost Quigley and Nancy Armagost Sloss (Dennis); his son Daric Armagost; seven grandchildren and two great-grandchildren; and many nieces and nephews. He is also survived by three brothers, Martin Armagost, George Armagost, and Kenneth Armagost (Eileen); and his lifelong friend, Wes Morris (Renee) of Naples, FL.

Visiting hours will be at Van Matre Funeral Home in Waterford?on Thursday, March 8th, from 4 p.m. until 8 p.m. The funeral service will be there Friday at 12:00 noon officiated by Pastor Greg Buzzanco. Burial will be in Chapinville Cemetery, Crawford County.