Joan Eleanor Robinson returned home to our Heavenly Father at 12:00 p.m. on March 12, 2018 at Pleasant Ridge Manor in Girard, PA where she was treated with kindness, honor and dignity over the past five years. Joan was a member and faithful servant of St. Augustine Episcopal Church in Edinboro, PA for 40 years. 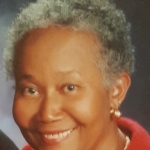 Joan was born in Kingston, Jamaica on September 14, 1940 to Wilhelmina Gayle and Leopold Williams. After moving to the U.S. she received a Bachelor’s of Science in microbiology with a minor in zoology in 1964 at Howard University. Later in life she completed a B.S. and M.S. degree in counseling at Edinboro University. Joan worked and retired as a medical technician at St. Vincent Hospital in Erie, PA after over 25 years of service. Joan was married for 47 years to Curtis Isaiah Robinson (1934-2015).

Joan was an educator as well and chose to serve as a student teacher in her early retirement. She was very soft-spoken and was always looking for a way to impart Godly wisdom by word and by example. Joan was not afraid of using her hands to serve the Lord. She also always tended to her garden and would give out her first fruit to her loving neighbors. She helped raise two children with wisdom, humility and sacrifice.

Joan is dearly missed by her loved ones who celebrate her life and her new peace with her creator. Joan is survived by four siblings: Jackie Williams, Barryington Gayle, Neil Gayle and Marcia Gayle; her two children: Milton Robinson and Cheryl Robinson; stepdaughter Debra Robinson; and grandchildren Reese Robinson, Remlee Robinson, Rio Kirven and Piper Kirven.

Joan will be buried next to her late husband at the Robinson family cemetery in Wilmington, NC at a later date after the funeral service on Saturday, March 24 at 10:00 a.m. at St. Augustine Church, 427 Plum Street, Edinboro, PA. Family and friends may pay their respects at the viewing on Friday, March 23 between 3 – 7 p.m. at Van Matre Family Funeral Home, 306 Erie Street, Edinboro. There will be additional viewing at 9:30 a.m. Saturday at St. Augustine Church.

The family gratefully declines flowers and donations, but prayers, condolences and memories are gladly accepted and may be shared at www.vanmatrefuneralhome.com.