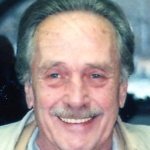 ?? He received his high school education at both Cambridge Springs and Townville Schools and enlisted in the US Navy in 1959. As a medical corpsman, he served during the Cuban Missile Crisis aboard the USS Essex. Following the service he furthered his education at Edinboro University, Gannon University and at St. Petersburg Junior College in Florida. In 1971, he was business owner and operator of Mikes News and Grill located on South Main Street in Cambridge Springs. In November of 1983, he and his parents became founding members of the Cambridge Springs Art Center and a School of the Arts both located in the Arcade Building in downtown Cambridge Springs. In November 0f 1993, he along with his mother became sole owners of the? Arcade and began extensive renovations of the historical building. In 1994, they opened two additional businesses there – Arcade Antiques and an indoor flea market. In 2001, the Arcade was sold. Mike was a very talented guitarist, singer, and songwriter. As a professional musician, he played throughout the country. He enjoyed writing, oil painting, and was knowledgeable of Cambridge Springs history. Mike was a nursing home volunteer and enjoyed visiting those who were resident elders.

Surviving family members include two daughters – Stacy Michelle Harlaff and Story Lynette Southworth-Maxwell, both of Florida. He also leaves behind three grandchildren and three sisters – Barbara Vought and her husband, Kimber of Kure Beach, NC; Dr. Bonita Wilcox and her husband, James of Cambridge Springs; and Lynn Weaver and her husband, Thomas of Waterford.

Memorials may be made to the Hermitage House Shelter, 237 South Main Street, Cambridge Springs, PA 16403.