June E. Straka Lavery Yaple, age 85, of Waterford, passed away at her home with her family by her side on Saturday, March 10, 2018. Born in Erie on January 29, 1933, she was a daughter of the late George and Elaine Hayes Straka. 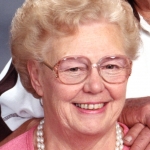 June married Marvin R. Yaple on May 10, 1969, and he survives along with three sons, John (Connie) Lavery, William Lavery, and Robert (Darcy) Yaple; a daughter, Kim Youmans; a brother, Gordon Straka of Rialto, CA; and 10 grandchildren and 12 great-grandchildren. She was preceded in death by her sister, Brenda Lanagan.

June graduated from Wesleyville High School in 1950 and worked for a few years at Plumpton Buick. Over a period of almost 40 years, she worked off and on again at Humes Chrysler in Waterford. She was a member of the American Legion Post 285 Auxiliary, the Stancliff Hose Auxiliary, and the Waterford Lioness Club.

Living life to the fullest, June was well-liked in the community and enjoyed getting together with her many friends.

Friends may call at Van Matre Funeral Home in Waterford on Monday from 2-4 and 6-8 p.m. Funeral services will be held there Tuesday morning at 11:00 a.m. followed by the burial at Waterford Cemetery.