Marvin Robert Yaple, age 86, of Waterford, passed away peacefully surrounded by his family at his home on Saturday, April 28, 2018. He was the son of the late Bernard and Dorothy Thomas Yaple, born in Greene Township, Waterford on November 26, 1931. 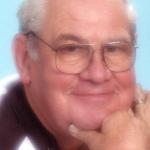 Marvin felt blessed to have such a wonderful family and many friends. He enjoyed working with his children on any projects, and he enjoyed watching his grandchildren. He spent many winters in Florida, he loved going on cruises, and he had many fond memories of playing hearts with Rita and Ray Proctor.

Many will remember Marvin from his countless years selling Christmas trees, and his many years in the trucking industry.

Marvin was preceded in death by his beloved wife, June E. Straka Lavery Yaple, who died just seven weeks prior on March 10, 2018.

Friends may call at Van Matre Funeral Home in Waterford on Monday from 2-4 and 6-8 p.m. Funeral services will be held there Tuesday morning at 11:00 a.m. with Pastor Ron Kennedy officiating. Burial with military honors will follow at Waterford Cemetery.