Maria Louise Carey, age 25, of Edinboro, died unexpectedly on Thursday, May 3, 2018. She was born in Erie on December 16, 1992 and is survived by her parents, Michael L. and Denise S. Smouse Carey. 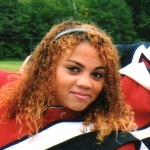 Maria was a 2011 graduate of General McLane High School where she excelled as a student. She was a member of the National Honor Society, a drum major in the marching band, and she competed in swimming and diving, and track and field. Maria continued her education at Penn State University where she was working towards a degree in Chemical/Nuclear Engineering. In 2017, she earned her certification as an Emergency Medical Technician and worked for Medevac in Pittsburgh.

Maria had a gentle and loving soul, and was blessed with many friends and a loving family. She especially cherished her close relationship with her brother, Mikie.

In addition to her parents, Maria is survived by five siblings– Angelina Estrada and husband Jim of Millcreek, Joseph Carey of Edinboro, Tera Shaughnessy and husband Casey of Ft. Dietrick, MD, Kyle Carey of Girard, and Mike Carey of Edinboro; also, many aunts, uncles, nieces and nephews. Maria was preceded in death by her brother, Brent Michael Carey in 2009, and her grandparents.

A private service will be held for the comfort of the family.