Imogene Louise States Pelton, 75, of Cambridge Springs passed away at Wesbury on May 22, 2018, after an illness of several years. Imogene was born on March 24, 1943, in Canoe Township, PA, the daughter of Carl States and Katherine Sutter States.? She graduated from Marion Center High School in 1961, and then attended Nyack College. For many years she was the office manager of Coldwell Banker Realtors of Edinboro. She recently celebrated her 50th wedding anniversary with her husband, Ronald Scott Pelton, whom she married on August 26, 1967. She was an accomplished cook and gardener who enjoyed spending time with friends and family. 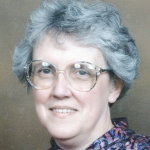 Friends may call at the Van Matre Funeral Home in Cambridge Springs on Saturday, May 26, from 1 to 3 p.m. and 6 to 8 p.m. with a funeral service to be held at 7 p.m. Interment will be in? Erie Cemetery.