Teresa Ann “Terry” Wiley, age 59, of Waterford, PA passed away on Thursday, August 23, 2018, after a courageous battle with cancer. She was the daughter of Donald and Joan Byrne and the late Joyce and Ken Brunner. 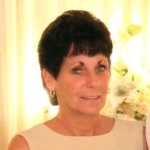 Terry spent most of her adult life working in electronics and as a server at the American Legion Post 285 in Waterford. She enjoyed spending time with her family, going to the casino, playing cards, cheering on the Green Bay Packers, going to Scratch Maggos in Delaware, and for those who knew her well, cleaning her house!

A memorial service will be held at a future date.