Mary S. Leonardi, age 92, of McKean, died Thursday, November 1, 2018 at her home. Born August 27, 1926 in Sheffield, PA, she was the daughter of the late John and Elizabeth Firda Dzvonyicsak.

Mary grew up and went to school in Sheffield and Erie. In 1947, she married Albert Paul Leonardi, and together they built their 1951 home in McKean Township, where they raised their daughter and happily lived the remainder of their lives. 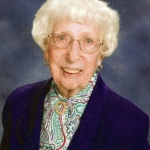 Mary enjoyed her home, yard and the wild birds that frequented the many feeders in the backyard. She was especially fond of bluebirds and Baltimore Orioles, as well as the purple Martin colony that returned to their suspended gourds every year. Mary was a talented seamstress and was skilled at knitting, sending over 1,000 of her hand-knit baby hats to third world countries. She was often busy in her kitchen as well, baking and cooking for family and friends. Mary was an active member of St. Francis Xavier Parish in McKean since the 1950’s.

She was preceded in death by her husband, Albert, in 2008; five siblings, John Dzvonyicsak, Margaret Dzvonyicsak, George Devon, Irene Skelton, and Helen Gallant; her legal guardians who raised her, Jane and George Swasho; and her grandson Eric Krouse.

Friends may call at Van Matre Funeral Home in Edinboro on Tuesday from 2-4 and 6-8 p.m., and on Wednesday morning at St. Francis Xavier Catholic Church in McKean from 9:00 a.m. until the time of the funeral mass at 10:00 a.m.

In lieu of flowers, memorials may be given to the Emmaus Soup Kitchen in Erie, Because You Care Pet Adoption in McKean, or to the Sunshine Circle at St. Francis Xavier Church.