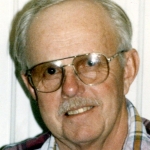 He was preceded in death by his wife of 55 years, Carol, who passed away on April 8, 2014; his sister, Anna Belle Wattras; and his parents.

Friends may call at the Van Matre Funeral Home in Cambridge Springs on Thursday, January 24, 2019, from 2-4 and 7-9 p.m. and are invited to a funeral service to be held there on Friday, January 25, at 10:30 a.m. with the Rev. Bryon Switala of Millers Station United Methodist Church officiating. Interment will be at Millers Station Cemetery.