Audria Leigh Garihan King, 93, passed away on February 9, 2019 at her daughter’s home in Spearfish, SD. She was born in Crawford County on May 27, 1925, daughter of the late Calvin L. Garihan and Donna M. Shearer Garihan. 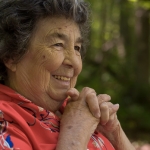 Audria was a member of Eastside Nazarene Church in Aurora, CO where she previously lived. She loved to sing and give praises to Christ and was a great witness to the Lord. What most will remember about her is her great ability to tell a story. She should have written a book, for in just one minute, she could have you laughing so hard you would cry.

Audria worked for years in a fabric shop, and cleaned military houses, along with her best friend, Gladys Sandy. She and Gladys traveled the states together, and are now traveling the heavens together.

Audria was preceded in death by her husband, Owen W. King; her parents; three brothers, Maxwell, Calvin, and Sterle; and two sisters, Karlita Dolinski and Nellie Styborski. She is survived by a brother, Joseph Garihan.

She will be missed by all, but we know she now walks with the Father and is no longer in pain.

Friends may call at Van Matre Funeral Home in Waterford on Monday morning from 10:00 a.m. until 12:00 noon. Burial will be private in Chapinville Cemetery.