Catherine Elizabeth Weary, age 88, of Waterford, passed away on February 15, 2019, at Edinboro Manor after a period of declining health. Catherine was born on November 11, 1930, in Erie, the daughter of John Borges and Kathryn Elizabeth Brader Borges. For sixty- 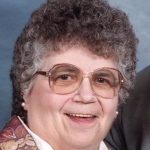 one years she was the loving wife of the late Charles E. Weary, whom she married on November 12, 1948. Loved by all who knew her for her quick wit and joy of life, she will be dearly missed by her many friends and family. Go in peace my mother to unite once more with the love of your life.

Friends may call at the Van Matre Funeral Home in Waterford on Sunday, February 17, 2019, from 1 until 5 p.m. at which time a funeral service will be held.