Ronald Allen Hall, 59, of Edinboro, passed away at his home on March 13, 2019, after courageously battling pancreatic cancer for 3 ? years. Ronald was born in Meadville on February 6, 1960, the son of the late Boyd Lee Hall and Anita Iversen Hall.? After graduating with the class of Cambridge Springs High School in 1978, he married Michelle Lynn Murray on September 18, 1982. In the early 1980?s, Ron worked with his father drilling commercial gas wells. In 1984, he began working for Meadowbrook Dairy for ten years until 1994. Then for several years he operated Ron Hall Well Drilling. Beginning in 1997, he started a 22 year career working as an assembler at GE Transportation until 2019. 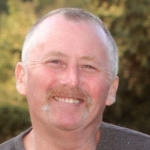 He was an avid fisherman, who enjoyed hunting and being outdoors. Ron was a generous, ambitious, hard-worker who was a true friend to many.

In addition to his father, Boyd Lee Hall, Ron was preceded in death by his brother, Arnold Hall.