Boneta “Bonnie” A. Maricle, 92, of Cambridge Springs passed away at Wesbury on March 22, 2019, after a period of declining health. Boneta was born in Meadville on September 15, 1926, the daughter of the late Henry Acker and Millie Donahue Acker. On December 12, 1942, she married Daniel Charles Maricle. Bonnie worked at Wesbury as a cook for over twenty-five years, retiring in 1998. She enjoyed crocheting, gardening, cooking and spending time with her family. She was a generous mother who devoted her life to caring for her family. 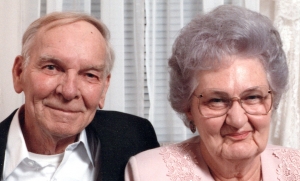 ?????In addition to her husband, Daniel Charles Maricle who passed away on May 18, 1993, Boneta was preceded in death by daughters: Linda Francisco and Suzanne Dasovich; son, Richard Maricle; and son-in-law, Julius Lester.

Friends may call at the Van Matre Funeral Home in Cambridge Springs on Tuesday, March 26, 2019, from 2-4? and 6-8 p.m and are invited to attend a funeral service there on Wednesday, March 27, at 11 a.m. Interment will be at Venango Cemetery.