Charlotte Trueblood, 99, transitioned to her heavenly home on March 6, 2019.? Charlotte was born July 28, 1919, in Erie, PA, to Dora E. and Milford M. Ferris. On March 23, 1964, she married Gwyn J. Trueblood. In 1987, she moved to Greensboro, NC, and had previously lived in Erie, Cambridge Springs and Meadville, PA. She had worked for Talon, Inc., retiring after thirty years of service. Charlotte was active in several organizations throughout her lifetime.? She was installed as Worthy Advisor of the Order of Rainbow for girls in Erie, PA.? She went on to hold office in the Eastern Star and was a member of the Golden Crown Chapter in Meadville, PA for 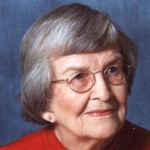 over 50 years.? She was an active member in Muir’s Chapel UMW in Greensboro, NC.? On a lighter note she loved to dance.? In her early twenties the society column of the newspaper reported she and a friend were the Ginger Rogers and Fred Astaire of Waldameer Park in Erie, PA.

She was preceded in death by her husband, Gwyn J. Trueblood in 1986; and her sister, Marilyn Fulkrod in 1998.