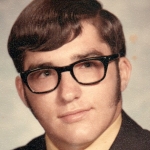 Dennis was born in Meadville, PA, on November 6, 1954, the son of the late Ernest Dunton and Ellen Davis Dunton. He graduated with the class of 1972 from Cambridge Springs High School and married Cynthia Ann Hodak on August 9, 1975. In 1974, he began a 42-year career working at Lord Corporation in Cambridge Springs until 2016, when he retired. Dennis was an avid golfer with the Tuesday night golf league at Country Meadows golf course, bowled with the Tuesday night league at Lost Lanes, and enjoyed hunting and fishing. As a member of the Christian Missionary Alliance church in Cambridge Springs, Dennis served as a deacon and particularly enjoyed singing with the men?s quintet.

In addition to his parents, he was preceded in death by his brother, Duane Dunton in 1984.

Memorials may be made to the American Diabetes Association and the Cambridge Springs CMA church.