James R. Klapthor, age 69, of Waterford, after a long and courageous battle with ALS, went home to be with the Lord on May 20, 2019. He was born April 4, 1950, the son of Ralph and Louise Michael Klapthor who predeceased him.

Jim graduated from Fort LeBoeuf High School in 1968. After graduation he entered the United States Navy where he served for four years. 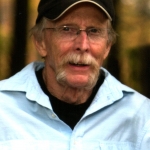 He retired after 37 years of employment as a lineman with GTE/Verizon. He was a member of Draketown Christian Church and had served as a trustee.

Jim married the love of his life, Susan Porter, on November 26, 1970, and they had 48 wonderful years together. They shared many motorcycle adventures on their Harley. Jim was an avid hunter and fisherman. Since being confined in a wheelchair, his 14 grandchildren brought him much joy.

In addition to his parents, he was preceded in death by two nephews, Bryan Klapthor and Randy Lovell.
Through this journey, Jim’s family would like to thank the Erie Veterans Affairs for their support and kindness, and also the hospice nurses, Denny and Lori, for their excellent care and compassion.

Friends may call at Van Matre Funeral Home in Waterford on Wednesday from 2-4 and 7-9 p.m. Funeral services will be held at Draketown Christian Church in Edinboro on Thursday at 11:00 a.m. with Rev. Daryl Myer officiating. Burial will be in Draketown Cemetery.

In lieu of flowers, memorial donations may be made to the ALS Association.