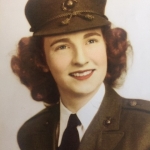 Jessie came to the United States at 8 months of age. She and her younger sister Betty were real coal miner?s daughters growing up in Harmarville, PA. Jessie joined the Marine Corps in 1942 becoming a Staff Sergeant while serving in Arlington, Virginia. After WWII, she became a housewife and mother of three children living in Cheswick, PA.

Jessie and her husband of 66 years, Mel, owned and operated Mel?s Village Tavern, J & M Trucking, Mel?s Metals and many more ventures. She and her family enjoyed vacationing at Edinboro Lake and traveling to Florida with her dear friend Stella Walmsley and their pet poodles.?Jessie was a strong, outspoken woman with boundless energy and a love of walking. Even in her 90?s she worked daily at Scotland Yards Greenhouse in Edinboro.

Jessie was preceded in death by her husband, Mel Marchese, and her daughters Karen Reilly and Kathy Powell. She is survived by her son John and his wife Julie Marchese of Edinboro, and many grandchildren and great-grandchildren.

A memorial will be private and held at the convenience of the family. Burial was in Edinboro Cemetery.

In lieu of flowers, donations may be made to the Edinboro Food Pantry, 150 South Perry Lane, Edinboro, PA 16412.