Theresa Marie Mergler, age 37, of Waterford, PA died Sunday, May 12th with family by her side. She was born in Erie, PA on November 9, 1981 to Richard and Vicky Mergler. She was a 2000 graduate of General McLane High School and worked at Waterford Beverage. 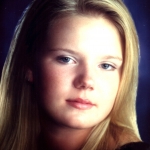 In addition to her father, Theresa is survived by her sister Angela (Mergler) Ethridge and Matt Arquitt; niece Kayla Baker and nephews Tyler Baker and Cody Heasley; her aunt and uncle Martha and Ray Showman Jr. who unofficially adopted her when she was 12; her uncle Rexford Ramey Jr., wife Bonnie; and many additional aunts, cousins, and dear friends.

Theresa loved scratch off lottery tickets, was kindhearted and willing to help anyone. She loved animals and often helped take care of other people?s pets. She especially loved her cat RaeLynn.

In lieu of flowers, the family asks that donations be made to French Creek Animal Rescue where RaeLynn was adopted (13869 Route 19 Waterford, PA 16441).

Visiting hours will be at Van Matre Funeral Home in Waterford on Wednesday from 3:00 until 7:00 p.m. with the funeral service following at 7:00 p.m. Interment will be in Gate of Heaven Cemetery, Erie.