Gale Alan Wolfe, 79, of Cambridge Springs passed away at his winter home in Avon Park, FL, after an extended illness. Gale was born on June 20, 1939, in Kellersburg, PA, the son of the late Roland Claire Wolfe and Alice Hamilton Wolfe. He graduated with the class of 1957 from Cambridge Springs High School and married his childhood sweetheart, Judith Gage, on December 16, 1958. From his 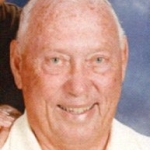 teenage years until 1979, he worked for the family business, Cambridge Springs Burial Service. Then he was employed by Northwest Rural Electric for over twenty years until his retirement in 2001. Gale was a member of St. Paul?s Lutheran Church and enjoyed singing in the choir for many years. He was a lifetime member of the Cambridge Springs Volunteer Fire Department and served in many capacities including thirteen years as Chief of the Department. Gale was also a member of the Crawford-Venango Fire School Committee and served as director of the organization for many years. He received the American Legion Post 381 Certificate of Commendation in 1990 for outstanding service to the community. In 1996, he was presented with the Pennsylvania Rural Electric Association Winston Donaldson Community Service in recognition of his commitment and dedication to the community. He and his family were frequent campers and boaters at the Tionesta Lake area. He and Judy were ?snowbirds?? and spent their winters in Avon Park, FL for many years.

In addition to his parents, he was preceded in death by his brother, Roland Wolfe in 2004; and his brother, Arthur in 2011

Friends may call at the Van Matre Funeral Home in Cambridge Springs on Tuesday, May 7, from 2-4 and 7-9 p.m. and are invited to a funeral service to be held on Wednesday, May 8 at 11:00 a.m. at St. Paul?s Lutheran Church in Drakes Mills with the Rev. Brian Riddle officiating. Interment will be in St. Paul?s Cemetery.

Memorials may be made to the Cambridge Springs Volunteer Fire Department or to St. Paul’s Lutheran Church.