Alan Harry Jimerson, 55, of Cambridge Springs, passed away at Edinboro Manor on Wednesday, June 26, 2019, after a lengthy illness. Alan was born in Erie on March 3, 1964, the son of Alfred Harry Jimerson and Camille Gayle Kovach-Delusa Jimerson. He graduated ?from Tech Memorial High School in 1983, and in 1985, began his career with the Edinboro University Maintenance Department until his 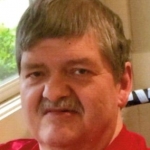 retirement in 2006. On June 24, 1996, he married Angela Lynn Seeley-Delp. He was a member of the Cambridge Springs Church of God and enjoyed bowling and spending time with his family and friends.

He was preceded in death by his father, Alfred Jimerson.

Friends may call at the Van Matre Funeral Home in Cambridge Springs on Saturday, June 29, form 6-8 p.m. A funeral service will be held a the funeral home on Sunday, June 30, at 2 p.m. with the Rev. Jim Callendar officiating.