Jacob Alistair Peters, age 24, of Cambridge Springs passed away unexpectedly on Tuesday, June 25, 2019, in Pittsburgh. Jacob was born in Meadville on January 12, 1995, the son of James Randall Peters and Elaine Renee Garwood Peters. He attained the rank of Eagle Scout and graduated with the Maplewood High School class of 2013. While he attended Allegheny College, he was a member of Phi 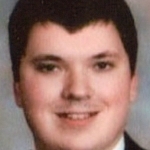 Gamma Delta fraternity and graduated with a degree in Chemistry in 2017. He worked in Pittsburgh in research and development for Vesuvius Corporation. He enjoyed hunting, traveling, cooking and beekeeping.

He was preceded in death by uncle, David Garwood, and aunt, Pamela Petrillo

Friends may call at the Van Matre Funeral Home in Cambridge Springs on Friday, July 5, from 6-8 and on Saturday, July 6 from 9 until 11 a.m. at which time a funeral service will be held.