Robert John Krieger, Sr., age 68, passed away peacefully on Saturday evening, August 17, 2019 at home surrounded by his family after a hard fought 2 1/2 year battle with kidney cancer. Bob was born in Erie on September 12, 1950 to the late Violet (Herman) Krieger and John Krieger, Jr. of Waterford who survives. 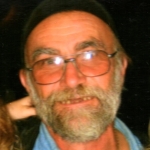 Bob was a talented lifelong mechanic and machinist, having worked at the former Erie Sand & Gravel before opening his own shop in 1978. He was a “Jack of all trades but a master of none” who loved pulling and collecting his antique Massey Harris tractors, and sharing culture of the theatre and art. He thoroughly enjoyed fishing the ice and waters of Lake Erie whether in his powered ice hut or with family and friends on his boat, the “Fishin’ Central”. Bob loved the outdoors and deer hunting. Most recently, he was rebuilding and racing his six-wheelers. Bob raced dirt cars in his younger years at Eriez Speedway where he met his beloved wife, Karen (Dropsho) whom he married in March 1972. He also raced go karts and held the 10-year annual race of the “No Big Deal.”

Bob recently became a life member of the Waterford American Legion Post #285, and he was a member of the Pioneer Steam & Gas Engine Society of Northwestern Pennsylvania. This month Bob would be celebrating 10 years of sobriety with The 12 Steps to Sobriety Group in Waterford. He was also a long time member of the S.O.N.S. of Lake Erie Fishing Club.

Visiting hours will be at Van Matre Funeral Home in Waterford on Wednesday from 1-4 and 6-9 p.m. The funeral service will be held there Thursday morning at 11:00 a.m. with Rev. William Cox officiating.

Memorial donations may be made to the S.O.N.S. of Lake Erie. A wake/dinner will be held in Bob’s memory following the funeral service at the American Legion Post 285 in Waterford.