Andrew “Henry” Plaza, age 92, longtime resident of Waterford, passed away Saturday, August 10, 2019 at St. Vincent Hospital in Erie. Born in McKeesport, PA on August 7, 1927, he was one of eight children of the late Casimir and Sophia Kulasa Plaza. He married Sue Coffin on February 3, 1962 and she survives. 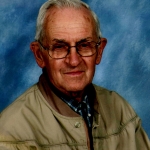 Andy grew up in McKeesport and entered the U.S. Army after high school. He was a veteran of World War II serving overseas in Okinawa, Japan. After returning home, he attended Alliance College in Cambridge Springs earning an associate’s degree. Andy worked for Lord Corporation for 37 years retiring in 1989, and he was a member of their Quarter Century Club. He took pride in his work as a tool designer knowing that his craftsmanship was contributing to the aerospace industry and to U.S. defense.

As an active member of All Saints Parish in Waterford, Andy was best known for volunteering at the annual fish fry dinners. He was also the very first Parish Council President of the former St. Cyprian Catholic Church.

Andy had many interests including hunting, fishing, gardening, and cooking. He loved to feed people and will be remembered for many of his specialties including his famous meatloaf. He also enjoyed birds and was a member of the Bluebird Society.

Surviving family members include his wife Sue Plaza; five children- Terry Cavanaugh and wife Nancy of Erie, John Plaza and wife Ann of Wattsburg, Mike Plaza of Waterford, Maria Smith and husband Steve of Edinboro, and Kathy Johnson and husband Chuck of Venango; also, six grandchildren- Ben and Emily (Thad), Eric and Andrew, and Ian and Noah; a great-grandson Casimir; his sister Gladys Gonillo and husband Sal of Waterbury, CT; and many nieces and nephews.

Friends may call at Van Matre Funeral Home in Waterford on Wednesday evening from 6-8 p.m. A prayer service will begin at the funeral home Thursday morning at 9:30 a.m. followed by a funeral service at 10:00 a.m. at All Saints Parish in Waterford. Officiating will be Rev. Fr. Gregory Passauer. Burial with military honors will follow at the new Waterford Cemetery on Old State Road.

Memorials may be made to the Bluebird Society of Pennsylvania or All Saints Parish.