Dawn Blackburn of Edinboro, died peacefully at Edinboro Manor with her family at her side on Saturday, September 14, 2019 following a brief illness. Dawn was born in Boston, Massachusetts and was raised in Grand Island, NY where she attended Grand Island High School. Her life’s journey brought her to Edinboro, PA where she made a home and raised her two children, Tivona and Adan. 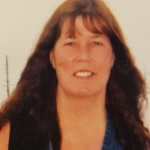 Her lifelong work was as a server. She enjoyed waiting on her guests and made many lifelong friends working in the restaurant business. She spent 17 years at Longhorn Restaurant and before that she worked at The Brown Derby, Ground Round, Damon’s, and T.G.I. Fridays. Most recently she was employed at Cannon’s Chophouse and the Crossroads Diner.

Dawn had the opportunity to travel and live in the western United States in Seattle, WA and Eugene, OR as a young woman. In November of 1995 she met the love of her life and future husband, Gerry Blackburn. The couple were married on September 5, 2003 and recently celebrated their 16th wedding anniversary.

Dawn was a remarkable cook and baker. She loved preparing wonderful dinners and desserts for her family. She loved spending time with her husband fishing on Edinboro Lake, and with her children, her step-children Andrew and Thom Blackburn, and her grandchildren Logan Schneider and Raylan Schlindwein. She was very fond of her former mother-in-law, Lois Schlindwein of Edinboro.

Dawn was a devoted and supportive spouse. She also enjoyed sitting on her deck watching hummingbirds and eagles, and enjoying flowers and nature. She loved her family and her black Labrador retriever “Stormy” and her two cats “Monkey” and “Lemur”. Dawn was an avid football enthusiast and a passionate Pittsburgh Steelers fan.

She was preceded in death by her mother-in-law Mary Blackburn with whom she was very close.

Friends may call at Van Matre Family Funeral Home in Edinboro on Wednesday evening from 6 – 8 p.m. and may attend the funeral service there Thursday at 10:00 a.m. Burial will follow in Edinboro Cemetery.