Gloria Jean Muckinhaupt Miklovic Port, age 92, former resident of Millers Station, Cambridge Springs, died September 20, 2019, at Rolling Fields where she resided the last five years. Gloria, the daughter of the late Stanley Muckinhaupt and Mable Kincaid Muckinhaupt, was born on November 19, 1926, in Rockdale Township where she lived most of her life. On January 25, 1946, she married Paul Miklovic who died on September 2, 1962. She subsequently married Lee V. Port on November 9, 1974, and he preceded her in death on October 1, 2006. 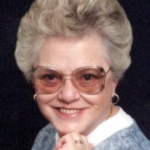 Following graduation from Townville High School in 1945, Gloria worked as a waitress for a number of years at restaurants in Cambridge Springs and Mill Village.? From 1970 to 1975, she worked as an assembler at Elgin Electronics in Waterford. Gloria was a life-time member of the Venango VFW Post #169 Auxiliary. She enjoyed playing cards and the keyboard in her home.

In addition to her husbands, Gloria was preceded in death by her three sisters: Grace Roscinski, Helen Crocker and Esther Burger; and a brother-in-law, Paul Muckinhaupt.