John W. Wright, Jr., 81, of Cambridge Springs went to meet his Lord and Savior on September 20, 2019.John, the youngest of six children, was born in Portville, NY, on March 14, 1938, to the late John ?Wes? Wright, Sr., and Lyda Sanden Wright. John worked as a tool grinder for Crescent Tool in Jamestown, NY, before moving to Pennsylvania to work for Zurn Industries. He 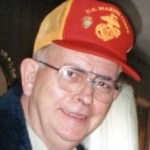 was a God-fearing, opinionated patriot who took great pride in the fact that all of his children served in the armed forces. However, without question his crowning achievement was meeting and falling in love with his beloved wife, Marlene. They were married on August 12, 1961, in Westfield, NY, and the happy couple celebrated their 50th wedding anniversary in 2011. Mr. Wright had been battling the effects of Parkinson?s disease for years, and his health was in a state of steady decline since the untimely death of his beloved wife in February 2014. They are now reunited for eternity beyond the sunset and remain a shining example of what a marriage should be. They will be sorely missed, but their memory remains. That memory is sure to make us smile in fond remembrance.

In addition to his parents and his loving wife of 52 years, Marlene (Higley) Wright, John was preceded in death by his son, Kevin Shawn Wright I; and his sisters: Marlene Scholl, Alice Hermann, Ethel Whitcher and Emily Mettler.

Survivors include daughter, Kelly Stanfield, and her husband, Lou, of Meadville; son, Kevin Wright, and his wife, Jodi, of Mechanicsville, VA; son, John W. Wright III and his wife, Angela, of Cambridge Springs; and his sister, Jennie Adair, of Olean, NY. John was a proud and doting grandfather of nine grandchildren including: Lewis and Daniel Stanfield of Erie; Kimberly McAfoose of Meadville; Nicole Jackson, Mackenzie Wright, Tyler Wright and Brett Wright all of Mechanicsville, VA; and Hannah and Wesley Wright of Cambridge Springs; and three great-grandchildren. In addition to his immediate family, he will be fondly remembered and dearly missed by cousins, nieces, nephews, friends, co-workers and everyone who knew him-especially those who took such great care of him at Arista Care on Park Avenue.

A memorial service will be held on Saturday, October 12, 2019, at 10 a.m. at the Van Matre Funeral Home in Cambridge Springs followed by a family gathering at 12 p.m. at the Venango VFW post 169.