Clara Mae Albrecht, 94, of Waterford, who loved to laugh, tell stories and was a whirlwind on the dance floor, passed to the light peacefully at home on October 4, 2019. She was born in Rockdale Township on May 25, 1925, the daughter of Earl and Margaret Patton Campbell. 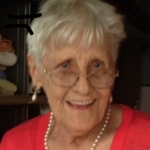 Mae graduated from Cambridge Springs High school in 1943 and married Joseph Albrecht on May 17, 1947. Together they loved and worked on their farm on Bagdad Road and raised their family. Mae was never afraid of hard work. She would say, “I showed ’em”. No one ever left her table hungry. Her apple pie and one liners were legendary. After retiring from milking cows in 1978, she and Joe enjoyed bus touring and they were active in the Waterford and Union City Senior Centers. Later, she joined the Red Hat Society and the Waterford Garden Club, and became a docent at the Judson House. Mae loved to sew, and her sons, grandchildren and great-grandchildren enjoyed the resourceful benefits of her labor.

She was preceded in death by her husband, Joe in 2004 and earlier this year, her sister Elaine.

Mae will be dearly missed by close family friends Amy Albrecht, Derek (Jean) Beck and more family, friends and neighbors than we have the ability to list.

Friends may call at Van Matre Funeral Home in Waterford on Tuesday from 1:00 until time of the funeral service at 3:00 p.m. Rev. Norman Field will officiate. Interment will follow in Waterford Cemetery.

In lieu of flowers, donations may be made to the Waterford Historical Society or St. Peters Episcopal Church in Waterford.