Theodore K. Burns, age 87, lifelong resident of Waterford, passed away Saturday, October 19, 2019 at Edinboro Manor. Born September 7, 1932 in Waterford, he was the son of the late Charles Everett Burns and Mable Dumond Burns. He was also preceded in death by his wife of 62 years, Elizabeth Owen Burns, who died May 23, 2017, his brother Robert Burns, and an infant daughter, Ann Burns. 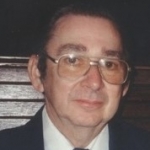 Family members that survive include his children– Roberta “Bobbie” Burns-Brown and her husband Keith of Edinboro, Charles Burns and his wife Alice of Cambridge Springs, and Heather Petrick and her husband Joe of Waterford; seven grandchildren and three great-grandchildren.

Ted worked at General Electric as a draftsman for many years and retired from there. Both he and his wife enjoyed gardening, and what started out as a hobby, turned into Burns’ Greenhouse, a successful business they operated in Waterford for many years. He was a longtime member of the First Presbyterian Church of Waterford and had served in the U.S. Navy after World War II. Ted and Elizabeth enjoyed traveling, usually in their RV, and together they were able to visit all 50 states, Mexico, Canada, and Europe.

Friends may call at Van Matre Funeral Home in Waterford on Tuesday from 2-4 and 6-8 p.m. and may attend funeral services there on Wednesday morning at 11:00 a.m. Burial will follow at Waterford Cemetery.