Gena Rene? McEntire Kane, 55, passed away unexpectedly at her home in Little Cooley on Monday, October 14, 2019. Gena was born on September 30, 1964, in Union City the daughter of Robert Blaine McEntire and the late Lois Ann Dean McEntire. She graduated from Maplewood High School with the class of 1983, and married Lawrence Kelly Kane on May 21, 1983. Gena worked for the 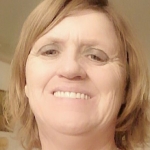 past sixteen years at Kwik Fill in Meadville. She was a dedicated wife, mother, and grandmother who enjoyed spending time with her grandchildren. Gena was an EMT and actively involved with the Bloomfield Volunteer Fire Department for over 27 years.

Gena was preceded in death by her mother, Lois McEntire, on December 14, 2002.

Friends may call at the Van Matre Funeral Home in Cambridge Springs on Friday, October 18, 2019, from 2-4 and 6-8 p.m. A funeral service will be held on Saturday, October 19, 2019, at 10 a.m. at? the Brown Hill United Methodist Church. Interment and committal will follow be at Rootville Cemetery.