Rachel Irene Eaton Marcinko, age 89, beloved wife, mother, aunt, sister, and grandmother, passed away on Tuesday, October 8, 2019. She was at home in McKean, Pennsylvania, surrounded by her family and her loving cat ?Frankie? when she died of complications of dementia/Alzheimers. Born April 22, 1930 to the late Francis M. Taylor and Everett B. Eaton, she was raised in Erie, Warren, and Crawford counties. The Eaton family had a farm in Rockdale Township and they later owned a restaurant called ?The Castle…Food Fit for a King? which was located in Erie at 12th and Liberty. During High School, Rachel played basketball and was a skilled baton twirler. She graduated from Saegertown High School in 1948, and later became a member of the Saegertown Alumni Association. 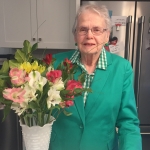 raduation, Rachel attended Spencer Nursing School in Meadville and later received her LPN degree from Saint Vincent School of Nursing. She was employed as a Labor and Delivery Nurse at Saint Vincent Hospital until she retired in 1987. Rachel had a true gift of working with mothers and their newborns. She cherished her work, and her patients loved her in return. Of the seventeen grandchildren who blessed her family, she had the loving opportunity to help deliver seven of them.

While in her training, she met a patient, Frank S. Marcinko, who would become her husband on Thanksgiving Day in 1951. They were married for 59 years, before he passed in 2010. Together the raised eight children in McKean. Family was a true joy to Rachel. Family vacations brought special memories from places like Nanticoke, Pennsylvania, Lily Lake, and later retirement trips to Florida, Louisiana, and Virginia.

Reading, rooting for the Pittsburgh Pirates, and watching the Cowboy/Western channel on television were some of her favorite pastimes. Her other simple and beautiful pleasures included cooking, baking, and gardening. She always had a bountiful garden and canned most of the harvest. She could make a savory spaghetti sauce as well as lasagna, pigs-in-the-blanket, Slovak kolachi bread, and her famous ?Eaton Potato Salad.?

Rachel was gifted with a heavenly voice and sang for the church choir, weddings, and funerals at the Saint Francis Xavier Catholic Church in McKean. A very spiritual woman, she was a long time member of the church and the Rosary Society.

In addition to her husband, Rachel was preceded in death by two sisters, Leah (Eaton) Chandler and Ruth (Eaton) Jones, as well as a cousin, Billy Eaton. She is survived and sadly missed by four sons: Stevan of McKean and Debbe Marcinko of Pittsburgh, Patrick and his wife, Dolores of Fairview, Thomas and his wife, Debra of McKean, and Michael and his wife, Heidi of Cambridge Springs; four daughters: Frances Herbel and her husband, Michael of Powhatan, VA, Linda Stonis and her husband, David of Edinboro, Sally Bayer and her husband, Robert of North Ridgeville, OH, and Ruth Skonieczki and her husband Timothy of Erie. In addition, there are seventeen grandchildren: Nicholas, Sarah, Jacob (Kaitlyn) Marcinko; Michael (Kara) and Jamie Herbel; Nicole (Michael) Zwick; Carrie (Shaun) Bell; Nicholas Tulino; Lauren and Seth Stonis; Kyle and Noah Bayer; Jeffrey (Samantha) and Zachary Marcinko; Gretchen (Shane) Wills and Aaron (Angela) Gast; Nathan, Nolan, and Lydia Marcinko. In addition, there are ten great-grandchildren and her dear friend Gert Christie. Plus, two sisters; Joyce (Eaton) Ring and Miriam (Eaton) Gripp and her husband William, and many loving nieces, nephews, friends and family members.

Friends may call at Van Matre Funeral Home, 306 Erie Street in Edinboro, PA, on Monday, October 14, 2019 from 3:00 to 7:00 p.m. Also, friends are invited to attend a Mass of Christian Burial at the Saint Francis Xavier Catholic Church, 8880 West Main Street, McKean, PA on Tuesday, October 15, 2019 at 10:00 a.m. Reverend Jason Feigh, pastor of the Church, will be the celebrant. Interment will be in Miller Station Cemetery, Rockdale Township, Crawford County following the mass.

Memorial gifts may be made to the Saint Francis Xavier Church in McKean or of one?s choice.

The Marcinko Family prayerfully thanks Asera Care Hospice of Waterford for the kind and compassionate care given to their mother.