Rodney L. Rutkowski, 65, passed away October 14, 2019 of natural causes at his home in Allison Park, PA. Rodney was born January 26, 1954 in Waterford, PA, the son of the late John ?Kaki? Rutkowski and the late Lucile Elegeer Rutkowski. Rod is survived by his brother David Rutkowski (Connie) of Waterford, and his sister Joan Rutkowski Baxter (Neil) of Albion. Also surviving are his nephews Bryce Baxter, Drew Baxter, Ryne Rutkowski (Erin) and niece Stephanie Rutkowski Fox (Shawn); great nephews Henry Rutkowski and Stuart Rutkowski, many uncles, aunts, and cousins, and his very good friends Karl and Alice Gibson and their children. 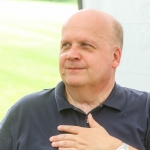 After graduation from Fort LeBoeuf High School in 1971 and the University of Pittsburgh in 1975, Rod was employed at St. Vincent Health Center as a Medical Social Worker. He returned to Pitt and earned his Master of Social Work degree in 1980. He has been employed by the University of Pittsburgh Medical Center at UPMC-St. Margaret in Pittsburgh for over 38 years, where at the time of his passing he was Director of Health Management.

Rod had several passions in his life: his family and friends, Pitt football and basketball, and most of all a true passion for his co-workers and his duties at St. Margaret and a compassion for the clients and patients he assisted.

Calling hours will be at Van Matre Funeral Home, 105 Walnut Street, Waterford, PA on Thursday from 3-7 p.m. followed immediately by a service officiated by Pastor Barb English of the McKean United Methodist Church. Burial will be private at St. Francis Xavier Cemetery in McKean, PA.

In lieu of flowers, donations may be made in Rod’s honor to the St. Margaret Foundation, 815 Freeport Road, 100 Medical Arts Building Suite 112, Pittsburgh, PA 15215 or to the charity of your choice.