Raymond E. Whitmer, better known as Ray, of Waterford, passed away Thursday, October 31, 2019 at home. He was born on January 17, 1932 in Emporium, PA to the late Charles and Ruth Logan Whitmer. 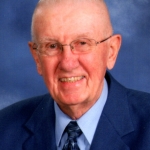 In addition to his parents, he was preceded in death by his sister, Mary Louise Zwald.

Survivors include his loving wife of nearly 59 years, Marilyn Duncan Whitmer, and their children- Kirk Whitmer (Kerstin) of Wuppertal, Germany, and Janel Amodio (Ignazio) of Toms River, NJ; three grandchildren- Pietro and Niko Amodio, and Clara Whitmer; a brother, Charles Whitmer (Loyce) of Anderson, CA; several nieces and nephews, and many other that called him “Dad Whitmer”.

Ray had a full life- he graduated from Emporium High School, Clarion State Teachers College, and Penn State University. He served in the U.S. Navy and Marine Corps, and became a Korean War veteran of the 1st Marine Division Association. He was an elementary teacher and principal for 34 years in the Bradford Area and Fort LeBoeuf Schools, retiring in 1993.

His memberships included Asbury United Methodist Church in Waterford since 1970, the VFW Post #6221 Emporium, PA, American Legion Post #285 in Waterford, and the Masonic Blue Lodge #749 F & AM Bradford, Coudersport Consistory. In 1971 he joined the Waterford Lions Club and held many offices including King Lion. The Club presented him with the Melvin Jones Award, the Fellow Award, and Joseph L. Wroblewski Award.

Ray spent much of his time reading, especially books on history. Sports were high on his list including all Ft. LeBoeuf sports, the Pirates and Steelers, and, of course, Penn State University, his favorite. He also enjoyed using his metal detector.

Family and friends are invited to call on Monday, November 4th from 2-4 and 6-8 p.m. at Van Matre Funeral Home in Waterford. A funeral service will be held at Asbury United Methodist Church in Waterford on Tuesday at 11:00 a.m. officiated by Reverend Tori Heath. Burial will be in Waterford Cemetery.

Memorials may be made to Asbury Church or a charity of choice.