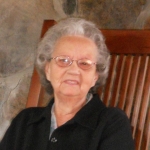 After growing up in Emlenton, PA and moving to Waterford in 1965, Jane and her husband opened up J & J Grocery in Waterford and operated it for several years. Jane could be seen behind the deli counter at the local grocery store for many more years. In recent years, Jane enjoyed watching birds that would come to visit the birdfeeder on her front porch, and she cared for her houseplants and enjoyed adult coloring.

Visiting hours will be Tuesday evening from 6-8 p.m. at Van Matre Funeral Home in Waterford. A prayer service will be held there Wednesday morning at 9:30 a.m. followed by the Mass of Christian Burial at All Saints Catholic Church, Rt. 97 Waterford, at 10:00 a.m. with Rev. Fr. Gregory Passauer as celebrant. Burial and committal service will follow at Waterford Cemetery.