Charles John Steffy, age 75, of Summit Township, died Wednesday, December 25, 2019 at UPMC Hamot after a brief illness. He was born to the late Raymond Leroy Steffy Sr. and Marjorie Hickox Steffy in Erie, PA on August 28, 1944. 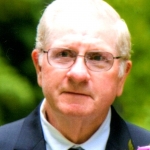 Chuck graduated from Fort LeBoeuf High School in 1963 and was in the U.S. Navy Reserve from 1963-1986 as a radioman. From 1963-66, he was active duty serving in Greece. Chuck was employed at General Electric in Erie for many years, starting as a motor testman and retiring as a locomotive testman.

Chuck was a loving and dedicated family man, and supported his wife and children’s endeavors as his own. His life’s joy was his seven grandchildren with whom he cherished spending every moment he could. He was passionate about the outdoors, spending his days gardening and tending his flock of chickens. He also loved hunting locally, and exploring the woods in the Allegheny Forest near the cabin he built. He belonged to the FRA and the Summit Senior Center, and he enjoyed attending shows at the Station Dinner Theater in Erie with his wife Heidi. His presence will be missed by the family and friends who loved him.

He was preceded in death by his parents, his brothers Raymond Leroy Steffy Jr. and Robert Eugene Steffy, and a nephew Brian Raymond Steffy.

Friends may call at Van Matre Funeral Home in Waterford on Sunday, December 29th from 2-4 and 6-8 p.m. Burial will be private in Waterford Cemetery.