John Edward Whittelsey, age 91, of Waterford, passed away Thursday, December 12, 2019 at Brevillier Village in Erie where he had resided since 2012. 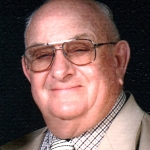 A lifelong resident of Waterford, he was born March 7, 1928 to the late Van Ness Whittelsey and Glady Whitney Whittelsey. He graduated from Waterford Academy and was married May 12, 1948 to his high school sweetheart, Betty J. Cross. Together they shared 68 years as husband and wife until her passing on September 14, 2016.

John served in the U.S. Navy Reserves from 1948-1952, and was employed by General Electric from 1946 until retiring in 1990. He was a life member of Stancliff Hose Company in Waterford serving as Chief for three years and as Jr. Fireman Advisor. He was also a member of the First Presbyterian Church in Waterford, the Siebenberger Club, the Masonic Lodge, and the Union City Country Club. Over the years he enjoyed skating, golfing, hunting and fishing, and being with his family, watching his grandchildren, and visiting with his many relatives and friends.

John was preceded in death by two brothers, Adrian and Rexford Whittelsey.

Friends and family may call at Van Matre Funeral Home in Waterford on Thursday, December 19th from 4 – 7 p.m. and on Friday from 10:00 a.m. until time of the funeral service at 11:00 a.m. Interment will follow at Waterford Cemetery.

In lieu of flowers, memorials may be made to the First Presbyterian Church of Waterford or Stancliff Hose Company.