Bernie Carl Zimmer (82) of McKean, PA, was born on Christmas Day, 1936 to the late Harrison and Marie (Fagan) Zimmer. He attended McKean School, then owned and operated his dairy farm while committing to driving bus for General McLane School District. In 1978, he began working at General Electric where he retired after 25 years of dedicated service. 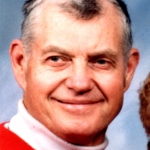 Bernie and his wife, Rosie Zimmer, celebrated their 61st anniversary this year; they married at Trinity Lutheran Church in McKean in 1958. He loved being outside and spending time with family. His family has many fond memories of snowmobiling, camping, and going for drives to see the fall leaves or getting ice cream on rainy days. He participated in antique tractor pulls and loved going to the races, faithfully helping out on his grandsons? racing teams for decades. He was known for always being there to help anyone who needed it.

Bernie passed away in his home surrounded by his family on December 2nd, 2019. He is greatly loved and will be deeply missed, but his family takes comfort in knowing that he gave himself to Christ many years ago, and that they will see him again.

Friends are invited to visiting hours at Van Matre Funeral Home in Waterford on Friday, December 6th from 3 – 7 p.m., and may attend the funeral service there on Saturday at 10:00 a.m.

In place of flowers, donations can be made to the Siegel Rare Neuroimmune Association (TMA) (1787 Sutter Parkway; Powell, OH 43065). The family wishes to thank Bernie?s doctors and nurses at St. Vincent Hospital and home care and hospice nurses.