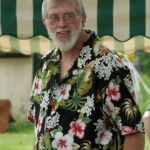 He graduated from General McLane High school in 1974. He worked as a custodian at James W. Parker Middle School for 37 years until he retired in 2017. He loved history and was particularly interested in the Civil War. He was a reenactor for 22 years and enjoyed to travel. If encouraged, he would discuss politics for hours. He loved any animal that was lucky enough to cross his path.

He was preceded in death by his wife Cinda, his father Robert D. McGahen, his sister Connie, his brother Douglas, his cousin Ronald.

Friends may call at Van Matre Funeral Home in Edinboro on Monday, February 3rd from 4-6 pm.