Kathleen Ann Pulling, age 76, of Cambridge Springs, passed away on January 23, 2020 at UPMC Hamot, surrounded by her loving family.She was born on April 6, 1943 in McKeesport, PA, the daughter of the late Francis and Irene McElhinny. 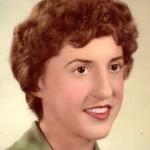 Kathy was an amazing cook, always making sure her family had bellies full of the most delicious comfort foods. She also enjoyed traveling with family to the mountains, to the oceans, and to wherever she could collect seashells and sea glass. You could find her working in her flower beds, feeding birds, painting ceramics, decorating birthday cakes, and loving her animals, especially her collies. She worked in the Wegmans Deli for 25 years where she took pride in her work and had many close friends. Kathy?s biggest love and greatest accomplishment was her family. She loved them with her entire heart. A few of her last words were, ?I?ll be watching over you. And when you see a cardinal, it will be me?.

Kathy is preceded in death by her mother, Irene (Malinic) McElhinny; her father, Francis McElhinny; and her son-in-law, Edwin Updike.

Friends may call at the Van Matre Funeral Home in Edinboro, PA on Saturday, January 25th from 2 to 4 pm and 6 to 8 pm and may attend the funeral service there on Sunday, January 26th at 2:00 pm. Committal service and burial will follow at St. James Cemetery in Crossingville, PA.

Memorial Donations may be made to the Leukemia and Lymphoma Society.