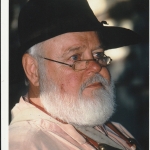 He was an admired figure and active member of the Edinboro community, and owned Poppa Ropp?s Video for several years before becoming a greeter at the local Walmart. Prior to retiring from his position as a Systems Manager at GTE Data Services, he was a customer engineer for IBM in Binghamton, NY. He was also a founding member of the NWPA Film Society, owner of the NWPA Film Office, and co-owner of the Eerie Horror Film Festival. In addition, people in the community adored him for his portrayal of Santa Claus at local events.

He was a co-founder of both the French Creek Living History Association and Compagnie LeBoeuf, enjoying encampments at Fort Niagara, Custaloga Town, and many other sites. He was also a critical part of saving the Fort LeBoeuf Museum in Waterford. He was also a member of the Edinboro Lions Club for several years, and volunteered as a delivery driver for his daughter-in-law at A Floral Affair.

In addition to his parents, he is preceded in death by his brother Larry Ropp and niece Judy Ropp.