Angela Sue Bundy Waid Wildes, age 47 of Waterford, passed away peacefully surrounded by family on Saturday, January 25, 2020, at UPMC Hamot, after a courageous battle with cancer. 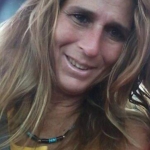 Angie was born July 12, 1972, in Meadville, to Robert and Audrey Bundy. Angie grew up in Cambridge Springs and attended high school there. She worked at AccuSpec Electronics until she became ill.

She married her husband Michael Wildes on October 26, 2011. They were together for 15 years.

A diehard Philadelphia Eagles fan, Angie truly lived life to the fullest. She loved spending time with her friends and family, especially her grandkids. She was happy being by the pool, and found great joy in her dogs and in going camping with her best friend Barb.
Angie was preceded in death by her father Robert Bundy; her maternal grandparents Neal and Goldie Roswell; and her paternal grandparents Fay and Zetta Bundy.

She is survived by her loving husband Mike of Waterford; her mother Audrey of Cambridge Springs; her sisters Kimberly Bundy of Cambridge Springs and Bobbi Jo Mott of Venango; her daughters Amanda Bundy of Erie and Darian McGee of Largo, FL; stepchildren Andy Flynn of Charleston, SC, Bobbi Oberlander of Waterford, Carleen Salas of Midland, TX and Jesse Wildes of Edinboro; 6 grandchildren; 2 nieces and 1 nephew; and other family and friends.

Friends may call at the Van Matre Funeral Home in Waterford on Tuesday, January 28, from 2-4 and 6-8, and may attend a funeral service to follow at 8 pm. Pastor Ron Kennedy will officiate.

In lieu of flowers, donations may be made to Because You Care animal rescue.