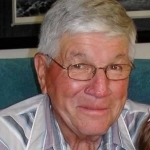 Paul owned and operated Skelton Trucking, and numerous other businesses, all of which started with hauling canned milk and produce. He always showed strong interest in the outdoors and agriculture, and enjoyed visiting friends, especially those in trucking and farming industries. He often attended various truck and farm auctions, and horse pulls with his friends. Paul had previously served as a Waterford Fair Board Director and Waterford Township Supervisor. He will long be remembered for being a selfless person with the goal of always providing for his family and others.

He was preceded in death by his parents and all thirteen of his brothers and sisters.

A celebration of Paul’s life will take place on Saturday, July 18th at the American Legion Post 285, 120 West 4th Street, Waterford, from 1-5 p.m. A service will be held at 2:00 p.m. followed by a meal and social time.
Memorials may be made to the Waterford Fair Association.