Clarence H. Tallman, age 84, of McKean, passed away Tuesday, April 7, 2020 after an extended illness.He was born at home on August 19, 1935 to the late Leo H. Tallman and Helen Nesbitt Tallman. 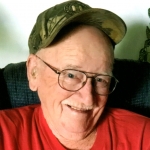 On May 26, 1953, Clarence graduated from Edinboro Area High School where he was known for his red hair and was an FFA officer. He hauled milk for Van Cise’s, then went into partnership with his dad and formed Tallman Trucking in 1955 – a business he continued to own and operate with his son Mark from 1975 until his retirement in 2000. Clarence continued an active work life, volunteering for McLane Cemetery and working for McLallen Construction. He was a dedicated, long-time member and usher at McLane Church, as well as a 32nd degree Mason with the Oasis Lodge 416, and had been a member also of the Zem Zem Shrine Club. Clarence and his wife Maggie were avid campers and enjoyed their outings with the Masonic camping group “The Cornplanters”.

More than anything, Clarence loved to be in his garage working on a truck or piece of equipment. He was a true family man and thoroughly enjoyed spending time with his family and friends. He married Margaret Annette Brown Klimek on May 3, 1974 and they enjoyed 45 years of wedded bliss.

In addition to his parents, Clarence was preceded in death by his son, Michael Tallman; his stepson Joseph Klimek; his son-in-law Mark Sherman; and his grandson Joshua Stefano.

Due to current restrictions, no public services will be held. A private Christian funeral service will be held for the family, with Reverend Brian Kelly of McLane Church officiating. Burial will follow at Dunn Valley Cemetery.

In lieu of flowers, memorials may be sent to the Edinboro Fire Department or to the Yolanda G. Barco Oncology Center of Meadville.